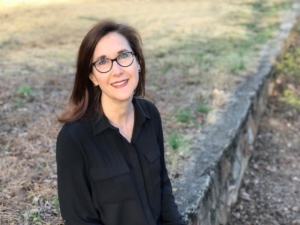 My name is Carla Crowder and I am honored to join Appleseed as Executive Director. I have admired this bold, strategic, and compassionate organization for years and am thrilled to be here.

Deep in my closet there’s a sweatshirt with the slogan, “Alabama the Great Surprise.” It’s a paint-splattered relic from an old tourism promotion. I can’t bear to part with a slogan so delightfully ambiguous – yet hopeful. Alabama surprises me on a regular basis, and likely anyone who has lived here long.

I am a native Alabamian, born in Selma, raised in Florence, educated in Montgomery and Tuscaloosa. Birmingham is now home. Each place has helped shape my affection, and at times frustration, toward Alabama. As I join Alabama Appleseed and begin to shape its vision, my work will be informed and defined by places, voices, and challenges across this state. And by years of listening.

Nearly 28 years ago, as a wide-eyed, rookie newspaper reporter at the Montgomery Advertiser, I started listening closely to the people of Alabama, people who wielded enormous power and others with very little, people in charge of government decisions and resources and those most impacted by them. All of those voices must be heard.

Sixteen years in journalism taught me many things. Be prepared to climb onto roofs, write a front-page story in a Walmart parking lot, knock on anyone’s door.

The greatest lesson was that the most compelling stories came from Alabamians without power and resources. Norma, a mother of six isolated in Gee’s Bend, determined to send all her children to college. Kate, formerly incarcerated and devoting her freedom to assisting other women returning from prison. Ralph, a boisterous genius who dedicated 40 years to guiding Alabamians with addictions into treatment instead of prison. And so many more.

Driven to direct advocacy, I entered The University of Alabama School of Law in my mid-30s and became an attorney in 2009. My clients were children sentenced to die in prison, women who endured inhumane conditions at Tutwiler prison, people on Death Row. For 5 years, I dug into the case of an innocent man who spent 20 years in prison because of an erroneous fingerprint identification and a broken system that refused to acknowledge the error. Finally, he walked free. Their experiences are critical to any understanding of the criminal justice reforms desperately needed in Alabama, and a large part of Appleseed’s current work.

More recently, my work as Program and Policy Director at The Women’s Fund of Greater Birmingham involved creating opportunities for low-income, single mothers to attain economic security for themselves and their children. I applauded dozens of young mothers as they earned community college certificates and moved into better jobs. At The Women’s Fund, we also joined the fight against predatory lending, a fight I am eager to continue in this new role.

At Alabama Appleseed, our advocacy efforts center voices like these often overlooked. We recognize the importance of research, public education, community organizing, coalition building, and litigation. This integrated approach to policy change to address injustice is so needed in order to address the deeply entrenched inequity that holds too many Alabamians back.

Though I’ve been a lawyer for nearly a decade, I’m still a storyteller at heart. Though I’ve been an Alabamian for a lifetime, I am still open to her surprises. I look forward to listening for and working toward Alabama’s next great surprises in this challenging new role.

Tweets by @AlaAppleseed
Public Support for Payday Reform Increases in Alabama What last week’s SCOTUS ruling on excessive fines and fees could mean for...
Scroll to top