As Alabama struggles to contain Covid-19, the illness caused by the novel coronavirus that has gripped the world’s attention since January, law enforcement officials and judges across the state have taken bold steps to prioritize public health over punishment by slowing arrests for low-level offenses and releasing from jails individuals who are not a danger to the community.

The results have been extraordinary. Between January and late April, at least 13 counties shrank their jail populations by more than a quarter, according to the Prison Policy Initiative. Baldwin and Houston counties, both notorious for their tough-on-crime conservatism, each reduced their jail population by about a third. Alabama’s largest county, Jefferson, with a jail capacity of 1,200, dropped its population below 650.

These counties’ decisive action has likely saved lives. Nationally, prisons and jails have been hotspots for the virus’ spread. That’s certainly true in Tuscaloosa, which on May 21 acknowledged that 21 inmates and one employee at its jail had tested positive for the virus, even as the city overall saw a 35% increase in the number of cases. 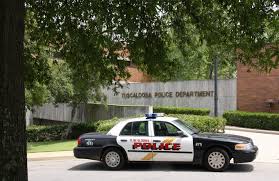 easily become a literal death trap, Tuscaloosa’s police chief has announced plans to round up and jail more people.              Though crime is down in the city, Chief Brent Blankley – who since his appointment in February has overseen roundups of low-level offenders including 116 misdemeanor arrests – announced  this week about a plan to “take our streets back.”

Among other things, he plans to increase traffic stops by buying tint meters. In Tuscaloosa, the crime of “Improper Window Tint” carries a penalty of $182. It also gives police an excuse to pull people over, often leading to additional financial penalties, vehicle searches, arrest, and incarceration for things such as unpaid traffic tickets or marijuana possession.

Blankley’s plan, dubbed “Operation Safe Streets,” is being rolled out as Tuscaloosa’s streets are stalked by a silent, invisible killer that has disproportionately haunted black lives in Alabama and across the country. Although Alabama’s population is about 27% black, 42% of confirmed cases of Covid-19 are within the black population, according to the Alabama Department of Public Health.

“Operation Safe Streets” also rolls out amid breathtaking reminders that black lives are also disproportionately taken by police and vigilante violence. Tuscaloosa has a history of racially biased  police practices. In 2016, the most recent year for which data is available, black residents were 4.1 times as likely as white residents to be arrested for possession of marijuana. This, in a college town; this, amid robust and longstanding evidence that white and black people use marijuana, and therefore possess it, at roughly the same rates.

In an America on edge – and in some places on fire – in response to the death in police custody of a Minneapolis man named George Floyd who told the police officer whose knee rested on his neck, “I can’t breathe,” Tuscaloosa’s police chief has decided the best use of public resources is tint meters that will in all likelihood be used to pull over, cite, arrest, and incarcerate black bodies in a jail that is riddled with a disease that has disproportionately sickened and killed them.

Tuscaloosa should think hard about what kind of city it wants to be. Right now, it is the kind of city that brags of a plan to funnel residents with windows it deems too dark into a jail unable to protect them from a deadly pathogen. This plan endangers the lives of the people who are arrested, the police who take them into custody, jail employees, and the families and communities they return to.

Operation Safe Streets will put the people of Tuscaloosa in harm’s way. At a time when safe jails are out of reach, it is unconscionable.

Tweets by @AlaAppleseed
A 71-year old man finally walks free, after marijuana sent him away