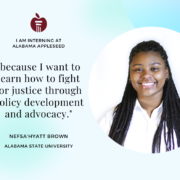 Our team at Alabama Appleseed is pleased to be working with several terrific students this summer. Through remote internships, these students are advancing the cause for justice in Alabama and helping us with research, writing, data collection, policy analysis, and more. The passion, dedication, and skill of these students brightens the future.

We are proud to welcome these students who are working with us to build a better Alabama:

Adelaide Beckman (The University of Alabama School of Law) 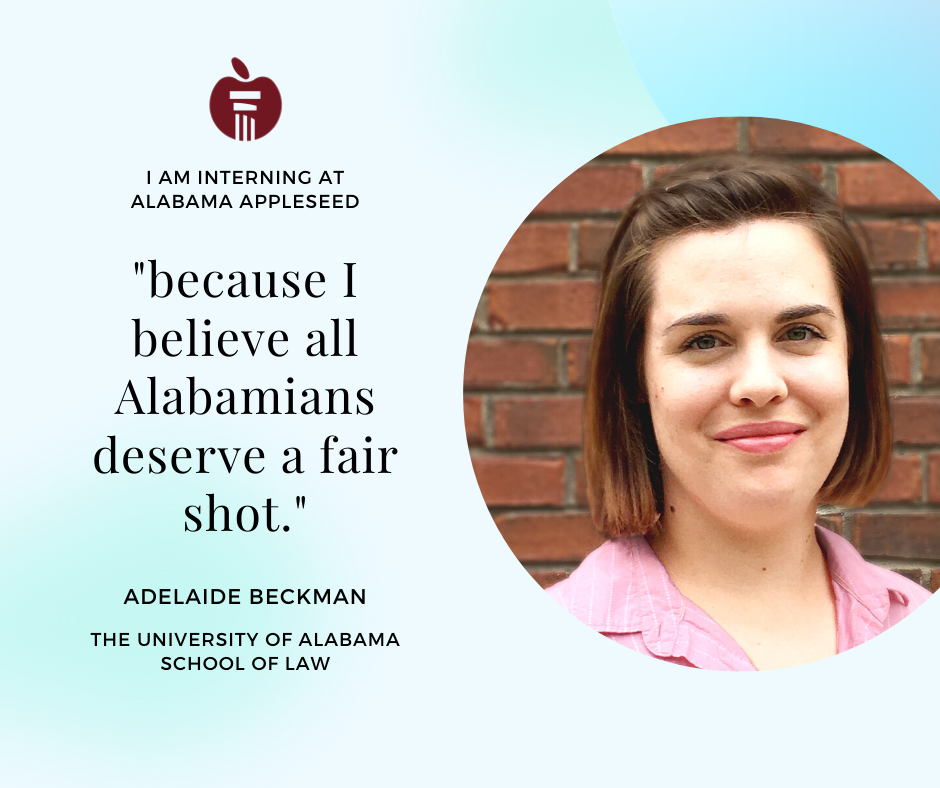 Adelaide Beckman is a second year student at the University of Alabama School of Law. Born into a military family, she has lived in eight states and two countries. In 2015, she graduated from the University of Alabama at Birmingham with a degree in Communication Studies. Afterwards, she joined Teach For America and worked as a public school teacher in Cincinnati, Ohio, for two years. In 2019, she joined the UA Law School Class of 2022 as a Dean’s Scholar.​ 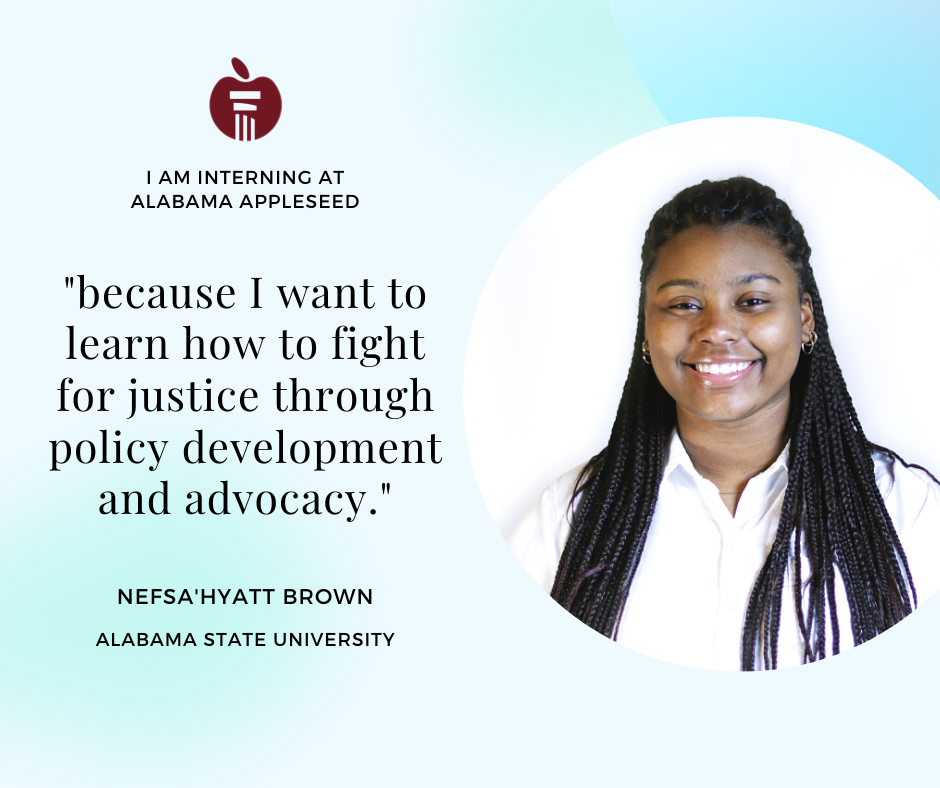 Nefsa’Hyatt Brown is a rising senior at Alabama State University majoring in Political Science with a minor in International Relations, Foreign Policy, and Global Studies. She is from Mobile, and as a native of Alabama, she have witnessed how various institutions within the American governmental system disenfranchise certain populations, specifically people of color and those who are impoverished, which has led to her interest in a career in the public sector. Upon graduation, Nefsa’Hyatt plans on going to graduate school to pursue her master’s degree and eventually become a foreign service officer for the United States. 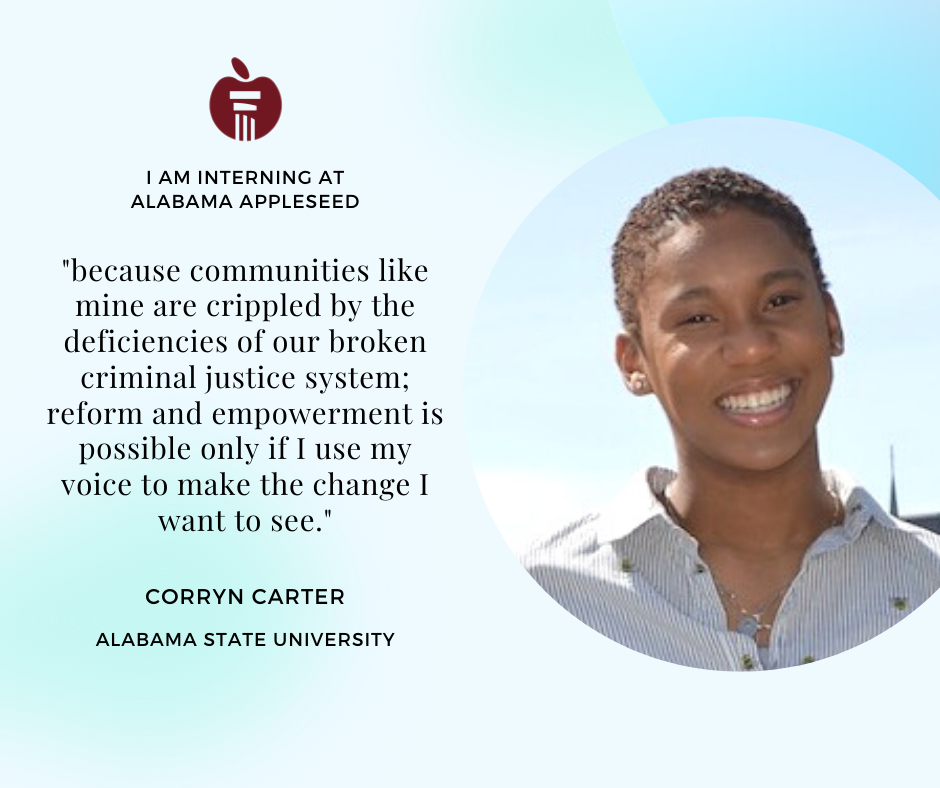 Corryn Carter is a rising junior Communications major with a minor in Political Science at Alabama State University. She currently serves as the Alabama Youth and College NAACP Juvenile Justice chair and was the 2019-2020 Juvenile Justice Chair for her university chapter of NAACP. 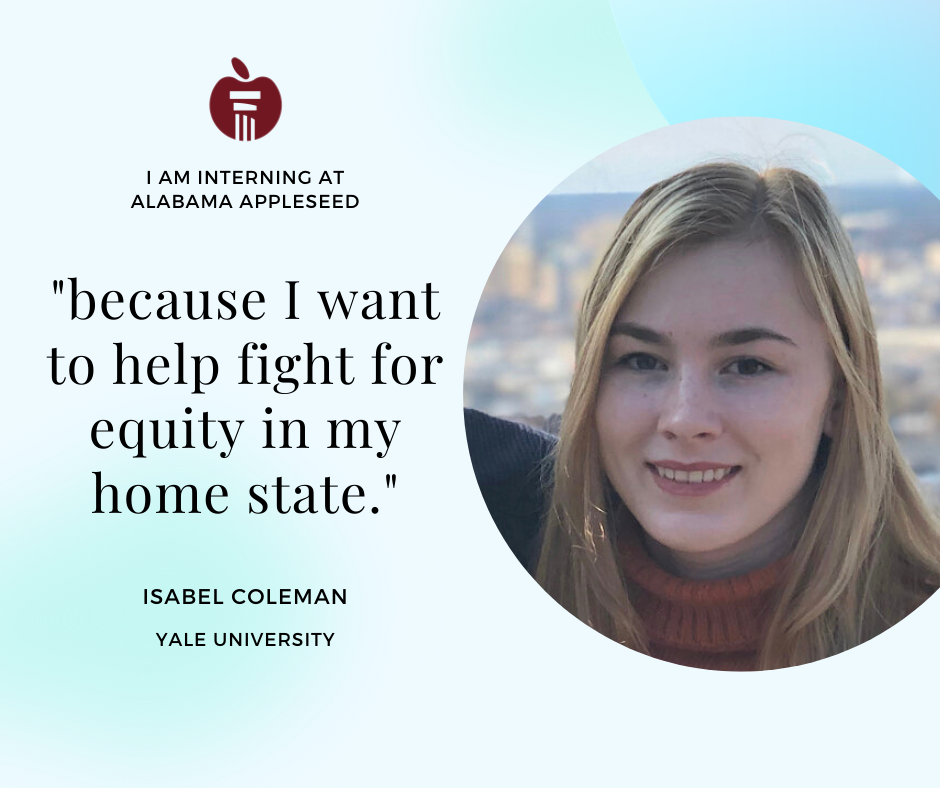 Isabel Coleman grew up in Birmingham Alabama. She studies philosophy and competes on the debate team at Yale University. Ultimately, she hopes to move back to the South and pursue a career in legal advocacy. She is most passion about prison reform and other efforts to address structural inequality.

Alli Koszyk (The University of Alabama School of Law) 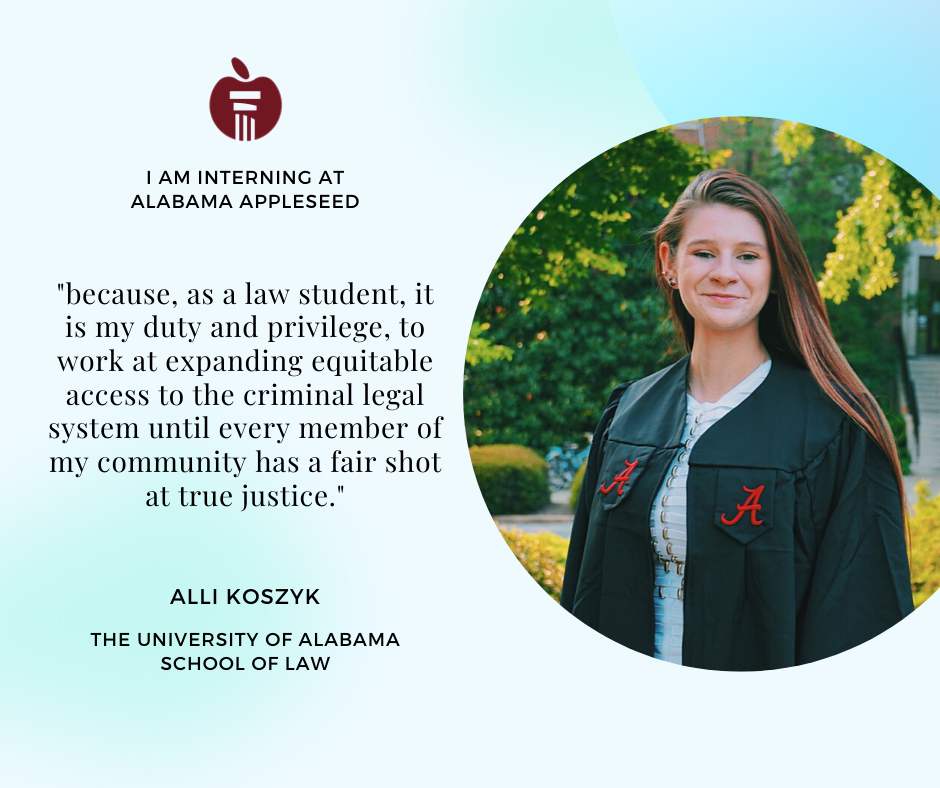 Allison Koszyk is a Chicago-Area native who came down South in 2015 for undergrad and never left. She earned her undergraduate and graduate degrees in Hospitality Management from the University of Alabama, and will begin her second year of law school in Tuscaloosa, this fall. Allison is on the Advisory Board for the Blackburn Institute, serves as Senator for the law school in the Student Government association. She is the Secretary for Outlaw, and the Director of Communications for the UA Chapter of the National Lawyers Guild. She has adopted y’all, and considers herself a Southerner by choice. Allison strives to fight injustice in all its forms and wants the rest of the world to start recognizing the good work that is being done here in the name of equality and justice. 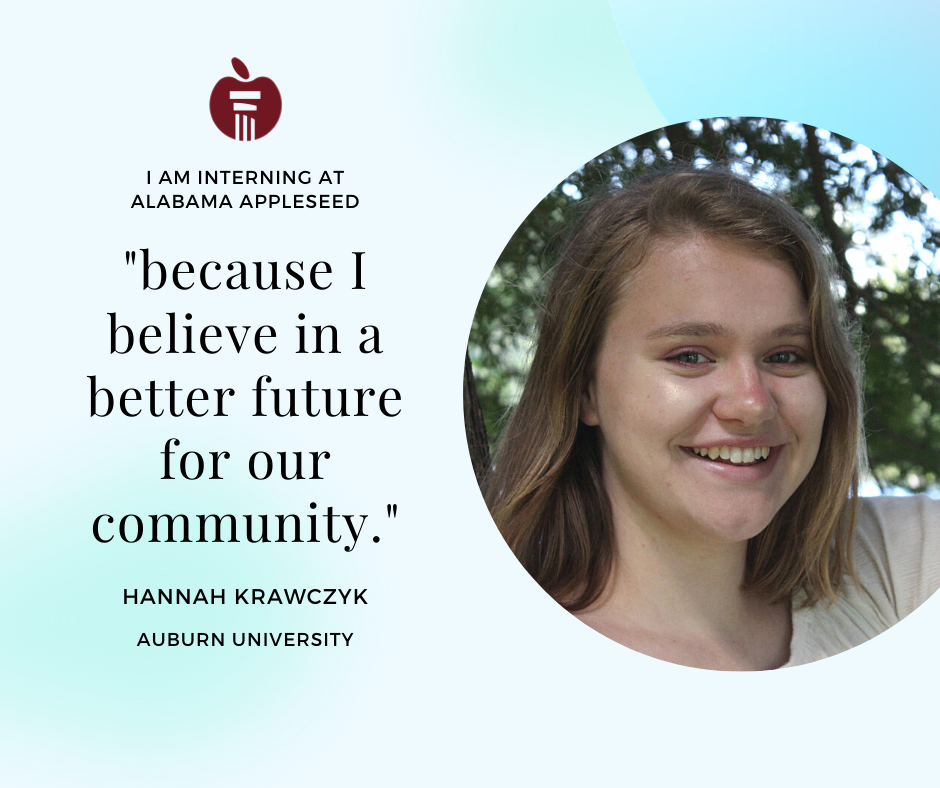 Hannah Krawczyk is a junior working on a degree in the accelerated Bachelors and Masters of Public Administration program at Auburn University. She is on the board of the League of Women Voters of East Alabama, and works on the Auburn Justice Coalition leadership team. Her interests in advocacy and research began after arriving in Alabama for university, and engaging with friends on-campus in advocacy and education projects.
.
Imani Richardson (Yale University) 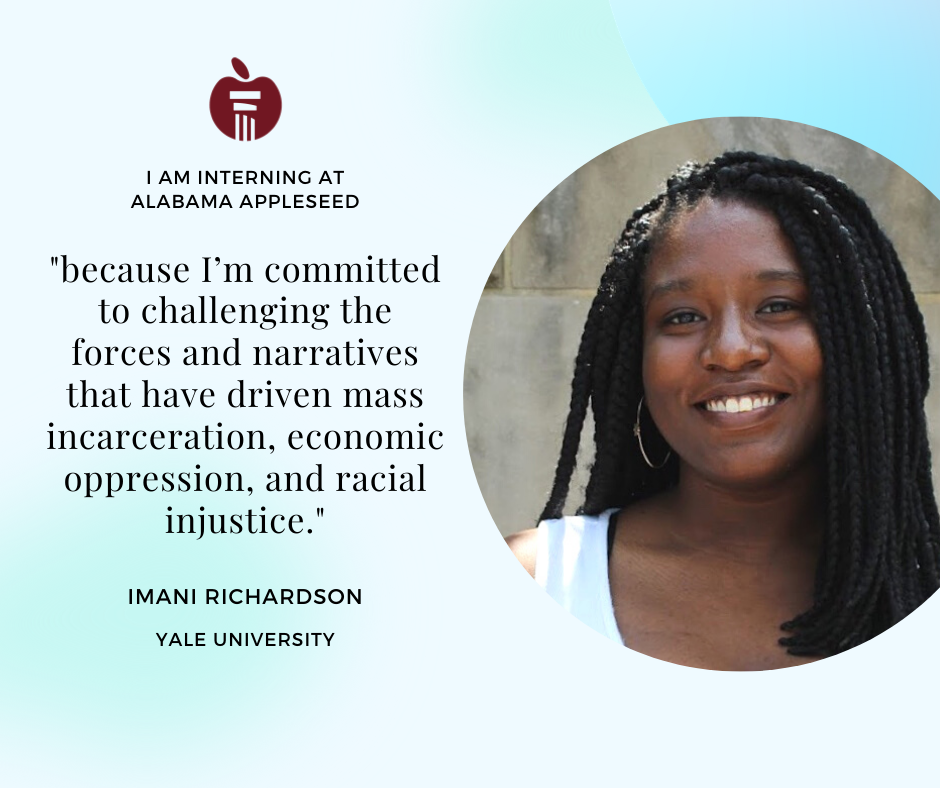 Imani Richardson is from Birmingham, Alabama. She is a rising senior at a Yale University, where she majors in African Studies and Political Science. On campus, she is involved with a number of cultural, advocacy, and service organizations, including Urban Improvement Corps and Yale Black Women’s Coalition, and after graduation, she hopes to pursue a career in public policy and advocacy. This summer, Imani is interning at Alabama Appleseed because she is committed to challenging the forces and narratives that have driven mass incarceration, economic oppression, and racial injustice more broadly by advocating for justice and change at the legal, legislative, and grassroots levels. She believes that in working alongside and demanding better for our society’s most vulnerable and discriminated against, we create a more just, more equitable society for all of us.

Renuka Srivastava (The University of Alabama at Birmingham) 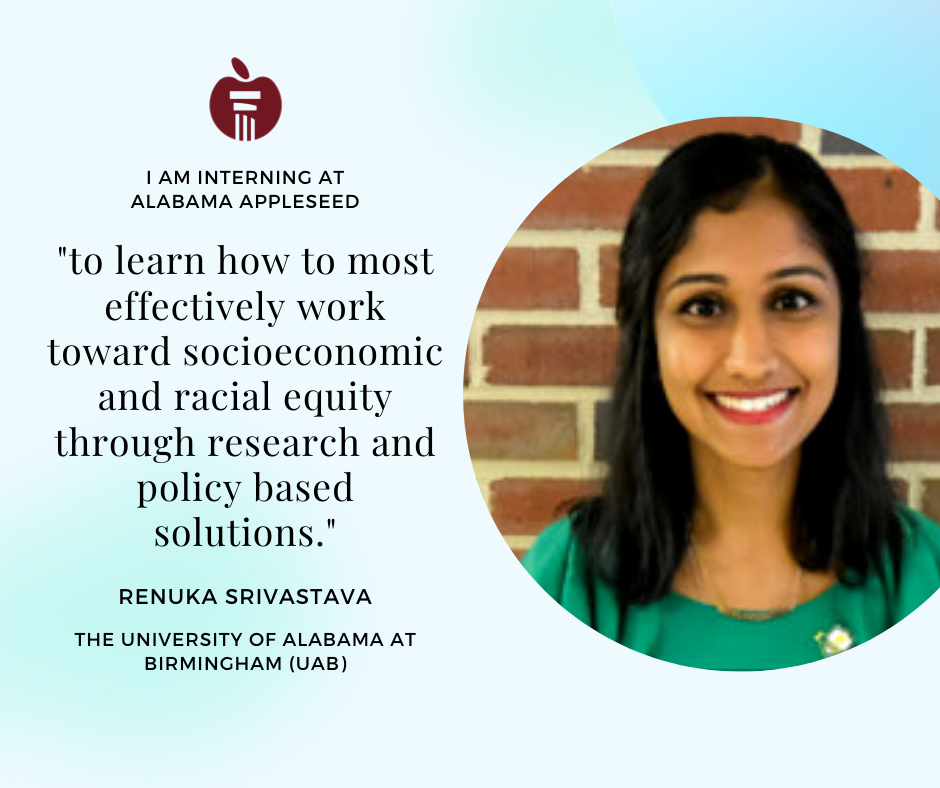 A native of Meridian, Mississippi, Renuka has always held a special place for the South in her heart. Renuka’s passion for the progression of social justice issues in the South has allowed her to bring significant changes on in her community ranging from registering thousands of voters to working on sensory inclusion on an international level. Renuka first started working on campaigns in the 7th grade and strongly believes in policy-based solutions. Renuka looks forward to attending law school this fall and work in the South following law school to litigate for disadvantaged individual and advocate against unjust public policy.

Eli Tylicki (The University of Alabama at Birmingham) 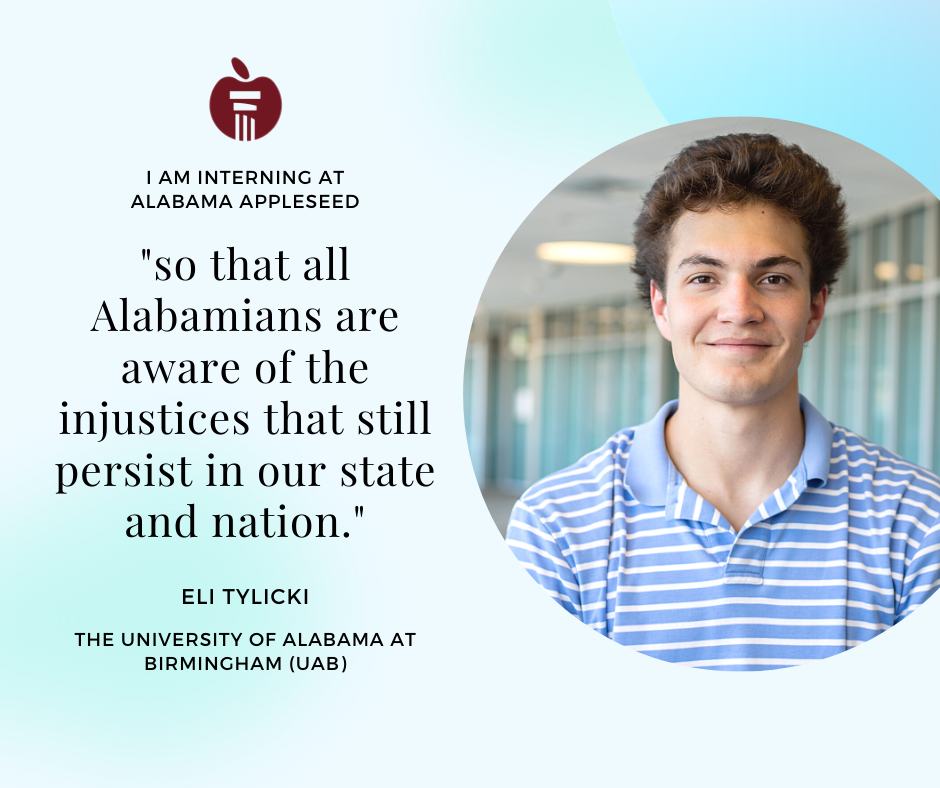 Eli Tylicki is an upcoming senior at the University of Alabama at Birmingham studying economics and philosophy. He loves learning, and he gets my fulfillment from helping others. Eli plans to finish at UAB and attend law school so that he may pursue a career in human rights law.

Tweets by @AlaAppleseed
Tuscaloosa’s “Operation Safe Streets” Makes Tuscaloosa More... Appleseed Network Response to the Murder of George Floyd and the Fight Against...
Scroll to top