You are here: Home / Blog / Author / Carla Crowder / A 71-year old man finally walks free, after marijuana sent him away

Birmingham, Ala. — A little more justice slowly made its way into Alabama this week.

Roberto Cruz, a 71-year-old man who had been sentenced to die in prison for a case involving marijuana – that’s right, only marijuana – was resentenced to time served and will soon be released from Donaldson prison.

Mr. Cruz’s odyssey through the Alabama court system contains so many remarkable elements it’s hard to know where to start. In 2003, he was charged with drug trafficking when the vehicle he was a passenger in was pulled over in Warrior and police found 25 pounds of marijuana in the trunk.  The driver received a 3-year split sentence and was deported.  Mr. Cruz was sentenced to Life Without Parole.

Roberto Cruz was ensnared in a system that has some of the country’s harshest sentences and lowest weight thresholds for marijuana offenses, Jefferson County Judge Stephen Wallace found, when he resentenced Mr. Cruz to time served.

The State’s primary evidence, according to Jefferson County Circuit Judge Stephen Wallace’s order: “[C]ircumstantial evidence suggesting that since the defendant was a passenger in the vehicle and marijuana has a strong odor, then he must have known about the drugs.”

At trial in 2005, Mr. Cruz’s attorney offered no mitigating evidence nor objection to the State’s use of prior convictions from 1985 to enhance his sentence under the Habitual Felony Offender Act. It took almost 16 years for the Alabama justice system to correct this error. Turns out, the State was not permitted to use those old convictions, all of which were drug crimes stemming from a single incident in Georgia.  Well-established Alabama case law excludes drug convictions prior to 1987 for use in HFOA sentencing because drug crimes had their own recidivist statute until then. But no one in Judge Gloria Bahakel’s Jefferson County courtroom 15 years ago could be bothered to point that out.

The story of how this error got corrected speaks volumes about the frailties in Alabama’s justice system and the harm done to defendants without access to money. The Alabama Court of Criminal Appeals affirmed the conviction and sentence.  Incarcerated and without the benefit of counsel, Mr. Cruz filed post-conviction petitions that went nowhere. Then investigators with the Southern Poverty Law Center discovered his case while researching marijuana trafficking cases. They put Mr. Cruz’s plight on the radar of Jefferson County Public Defender Adam Danneman, who vigorously took on the case.

Judge Wallace’s order, most importantly, provides immediate release to a 71-year-old man who has no business at Donaldson prison. But it goes further in pointing out the “disturbing” reality that Alabama is still sending people to prison forever for marijuana, a substance legal in 11 states, and decriminalized in 16 more. “Commercial distribution of cannabis is allowed in all jurisdictions where it has been legalized, except for Vermont and the District of Columbia,” he wrote.  Even in the surrounding southern states of Georgia, Florida, and Tennessee, Alabama’s weight threshold for a trafficking conviction – greater than 2.2 pounds – is way out of line.

“Judge Wallace’s order hits the nail on the head. We have the lowest thresholds and the harshest punishments in the country for marijuana in this state,” Mr. Danneman told me. “Regardless of how you feel about the legalization/decriminalization of weed, 15 plus years in prison is a shockingly harsh punishment. I’m glad we were able to do something about it.”

Appleseed and the Southern Poverty Law Center focused on Alabama’s harsh marijuana laws in our report, Alabama’s War on Marijuana: Accessing the Fiscal and Human Toll of Criminalization. We found that marijuana enforcement costs Alabama taxpayers $22 million per year, a cost worth examining given the enormous state budget shortfalls anticipated by the COVID-related economic downturn and court closures.

The human costs are much worse.

In leaving prison as an older person once sentenced to die there, Mr. Cruz is in good company.  Within the last year, 72-year-old Geneva Cooley and 58-year-old Alvin Kennard have walked free, in large part because of Jefferson County judges and prosecutors who were unafraid to take a second look at how the mistakes of our past are wasting lives and hurting people.  Like Mr. Cruz, Ms. Cooley’s LWOP sentence was for drug trafficking. 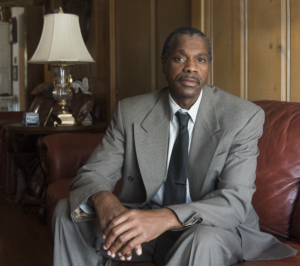 Mr. Kennard at his Bessemer home a few months after his release from prison. Photo by Bernard Troncale

Mr. Kennard was my client and I still see him on a regular basis. Within 6 weeks of release, he secured a job at a car dealership. He talks about going to work like it’s the best thing that ever happened to him. Work, family, and church are his priorities.  In fact, Mr. Kennard and Bessemer District Attorney Lynniece Washington attend the same church. And she is fine with that, she once told me. After all, she saw no purpose in opposing Mr. Kennard’s resentencing. He had served 36 years for a $50 robbery.

But there are so many more like them. According to data from the Alabama Sentencing Commission that Judge Wallace included in his order, 22 people in Alabama are serving sentences of Life Without Parole for drug convictions, 255 for robbery – all crimes that require no physical injury for a conviction.  But under Alabama’s Habitual Felony Offender Act, that does not matter.

More than 100 of these people are over 60 years old. As COVID-19 spreads through the Alabama Department of Corrections, with now 25 confirmed cases among staff and incarcerated people, the potential consequences of these sentencing decisions become more fraught.

We celebrate with Roberto Cruz. And still we search for the ways Alabama’s criminal punishment system will somehow provide justice to the many others like him.

Tweets by @AlaAppleseed
Black Belt COVID-19 testing improves, but there is much more to do Tuscaloosa’s “Operation Safe Streets” Makes Tuscaloosa More...
Scroll to top